Chaga mushroom grows uniquely on the birch tree and is almost as hard as the trunk itself. Chaga is often referred to as ‘the mushroom of immortality’.

Traditional Use and Health Benefits

Called “The Mushroom of Immortality” by the Siberian Russian Shamans and the “Diamond of the Forest” by the Japanese, Chaga earns its moniker, “The King of the Medicinal Mushrooms” due to it being one of the most powerful antioxidants in the world. Harnessing the power of ancient trees, it draws its nutrients from the inner layers of the bark of the tree which it grows on – normally silver and white birch trees.

There is a rich history of human Chaga consumption, stretching back for millennia, especially in Siberia with legends telling of an amazing birch fungus with miraculous health properties.  Accounts date back as far as 1000 BCE in Traditional Chinese Medicine, with it being used to balance the body’s life force or “Chi” energy and to boost the immune system.

Chaga mushrooms are especially high in a compound called super-oxide dismutase (SOD), this is an enzyme which reduces the damage done to cells by “super-oxide”, the most common free radical in the body. Studies have shown that SOD acts as an antioxidant and anti-inflammatory, with researchers now investigating the potential of it as an anti-aging treatment as it is known that, as we age, SOD levels drop whilst free radicals increase. Super-oxide dismutase also aids the body in using zinc, copper and manganese. Naturally synthesised and with a biological power unmatched, Chaga provides SOD in a highly bioavailable form which we can utilise either topically or internally.

Along with most other medicinal mushrooms, Chaga is rich in beta-glucans – one of the most potent and healing polysaccharides known. It is renowned for its role in in activating the immune system and reducing the blood sugar of people who have abnormal blood sugar peaks.

These powerful fungi are one of the most alkaline foods on earth due to their dense mineral content: Calcium, cesium, iron, magnesium, phosphorus, potassium, rubidium, silicon and sulphur and extremely high in zinc. It is thought that many diseases are unable to flourish in an alkaline environment.

Chaga is highly regarded as an adaptogen – adaptogens are a unique group of phytonutrients which help your body adjust to stressful circumstances ranging from extreme heat or cold to infections or trauma.

Chaga has a very long history of use in Russian and Siberian folklore and herbalism, it was traditionally made into medicinal tea, used to start fires by carrying a lit Chaga coal, used as a dye, and made into drums. Shamans and healers recognised the Chaga Mushroom as holding ancient wisdom, as well as providing an essential source of human nutrition including phyto-chemicals and a rich mineral content.

The Siberians used it to boost physical stamina and attain a long life – it has been noted by contemporary Russians that in the districts where Chaga was used, there was no cancer. In looking at their close neighbours the Inuits (who did not use Chaga), it is interesting to note that the average life span of the Inuit was 40 – 50 years in contrast to the people from Siberian tribes who regularly lived to be 90 – 110 years old. 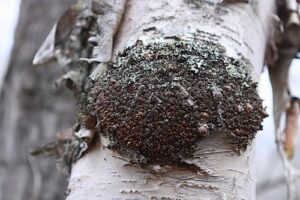 Suggested use of Organic Chaga Powder:

Research shows the best way to draw the nutrients from chaga is by water extraction. We do not recommend using boiling water with raw chaga, since the hot temperature may corrupt the melanin complex and the polysaccharides, among other active ingredients.

Place 1 litre of purified water in a pot. Bring water up to roughly 50°c. Place 2-3  tablespoons of powder into the water. Cover with lid, take off the heat and set aside to brew for 10-12 hours. Strain off and store in a glass jar in a cool dark place. Chaga tea can keep for up to 14 days in the fridge.

There are no reviews yet.

Refer to a friend

Want to earn money by sharing our products? Create an account to start earning!